In Deep.Net a tensor is an n-dimensional array of an arbitrary data type (for example single, double or System.Numerics.Complex). Tensors are implemented by the ArrayNDT<'T> class and its derivatives ArrayNDHostT (for tensors stored in host memory) and ArrayNDCudaT (for tensors stored in CUDA GPU memory). The Deep.Net tensor provides functionality similar to Numpy's Ndarray and MATLAB arrays, including vector-wise operations, reshaping, slicing, broadcasting, masked assignment, reduction operations and BLAS operations. The API for host and GPU stored tensors is equal, thus a program can make use of GPU accelerated operations without much porting effort.

You can run this example by executing FsiAnyCPU.exe docs\content\tensor.fsx after cloning the Deep.Net repository. You can move your mouse over any symbol in the code samples to see the full signature.

To work with the tensor library, open the ArrayNDNS namespace.

The first argument to the ArrayNDHost.initIndexed function is an F# list specifies the shape of the tensor. The second argument is a function that takes the n-dimensional index (zero-based) of an entry and computes its initial value; here we use the formula \(5i + j\) where \(i\) is the row and \(j\) is the column of the matrix. The data type (here float) is automatically inferred from the return type of the initialization function. By default row-major storage (C storage order) is used.

The resulting tensor has the following entries.

We can also create a tensor filled with zeros using the ArrayNDHost.zeros function.

In this case we must specify the data type (int) explicitly, since there is no information in the function call to infer it automatically.

We can use the ArrayNDHost.ones function to obtain a tensor filled with ones.

The ArrayNDHost.identity function creates an identity matrix of the given size.

A tensor of rank zero can be created with the ArrayNDHost.scalar function.

The numeric value of a zero-rank tensor can be extracted using the ArrayND.value function.

The ArrayNDHost.ofSeq converts a F# sequence of finite length into a one-dimensional tensor. For example, the code

creates a vector of all multiplies of 3 in the range between 0 and 20:

A list can be converted into a one-dimensional tensor using the ArrayNDHost.ofList function.

Conversion to F# lists and arrays

Use the ArrayNDHost.toList function to convert a tensor into a list. A multi-dimensional tensor is flattened before the conversion.

Tensors can be printed using the %A format specifier of the standard printf function.

The output of large tensors is automatically truncated to a reasonable size.

Individual elements of a tensor can be accessed using the tensor.[[idx0; idx1; ...; idxN]] notation. Zero-based indexing is used. For example

accesses the element at index \(1,1\) and returns 5.0. Note that the indices are specified with double brackets ([[ and ]]) and separated using a semicolon.

Tensors are mutable objects. An element can be changed using the tensor.[[idx0; idx1; ...; idxN]] <- newValue notation. For example

changes the tensor to

Slicing creates a new view into an existing tensor. Slicing is done using the tensor.[rng0, rng1, ..., rngN] notation. Note that the ranges are specified within single brackets and separated using commas.

Let us select the first row of tensor a.

The asterisk selects all elements of the specified dimension. The result is a tensor of rank one (i.e. a vector) with the entries

Since a1 is a view of a it shares the same memory. Changing an element of a1 by assigning a new value to it

changes the tensor a as well. This can be seen by outputting a1 and a.

The corresponding output is

The slicing notation can also be used for changing multiple elements of a tensor at once. For example

sets all elements of the first row of a to 1. The tensor a is now

All slice range operators can be combined arbitrarily.

The reader should note that the result of selecting a single element using the slicing operator, e.g. a.[1,1], is a tensor of dimension zero sharing the same memory as a.

Reshaping changes the shape of the tensor while keeping the number of elements constant.

We can use the ArrayND.reshape function to transform this matrix into a vector of length 16.

Now b1 has the value

We can also specify -1 for the new size of at most one dimension. In this case its size will be chosen automatically (so that the number of elements does not change). For example

If the tensor to reshape has row-major order (C order), then ArrayND.reshape creates a new view into the existing tensor. Otherwise the tensor is copied during the reshape operation. If you need to ensure that no copy is performed, i.e. the original and reshaped tensor share the same memory, use the ArrayND.reshapeView function instead. It will raise an error if the original tensor is not in row-major order.

The ArrayND.swapDim function creates a new view of a tensor with the given dimensions swapped. For example

transpose the matrix b into

The original and tensor with swapped axes share the same memory and modifications made to one of them will affect the other one. A matrix can also be transposed using the ArrayND.transpose function or the .T method, i.e. ArrayND.transpose b and b.T both transpose the matrix b.

The ArrayND.reorderAxes function can reorder axes arbitrarily. It takes a list (of length equal to the rank of the tensor) with each element specifying the new position of the corresponding axis. The list must be a permutation of the axes indices, i.e. duplicating or leaving out axes is not permitted. Consider the rank three tensor b2 from above; then

creates the view b4 with shape \(2 \times 2 \times 4\). It is important to understand that each list entry specifies where the axis moves to, not where it is coming from. Thus, in this example, axis 0 becomes axis 2, axis 1 becomes axis 0 and axis 2 becomes axis 1.

The ArrayND.padLeft and ArrayND.padRight functions add a new axis of size one on the left or right respectively. If you need to add an axis at another position, use the slicing operator with the NewAxis identifier. For example

An axis of size one can be repeated multiple times with the same value. This is called broadcasting. Consider the \(1 \times 4\) matrix

We can use the ArrayND.broadcastToShape function,

to obtain the tensor

Broadcasting is also performed automatically when performing element-wise operations between two tensors of different, but compatible, shapes. This will be explained in the section about element-wise tensor operations.

It is also possible to apply an operator to a tensor and a scalar of the same data type. In this case the scalar is broadcasted (repeated) to the size of the given tensor. For example

If a binary operator (for example +) is applied to two tensors of different shapes, the library tries to automatically broadcast both tensors to a compatible shape using the following rules.

If the shapes still differ after applying the above rules, the operation fails.

The standard F# arithmetic functions, such as sin, cos, exp, log, can also be applied to tensors. For example

calculates the sine of f element-wise.

It is also possible to apply an arbitrary function element-wise using the ArrayND.map function. For example

An in-place variant that overwrites the original tensor is the ArrayND.mapInplace function. The ArrayND.map2 function takes two tensors and applies a binary function on their elements.

The ArrayND.sum function computes the sum of all elements of a tensor and returns a zero-rank tensor. Thus, in our example

The ArrayND.sumAxis function computes the sum over the given axis. Thus

computes the sums of all columns of the matrix

resulting in the vector

The tensor product between two tensors can be obtained using the %* operator or the ArrayND.tensorProduct function.

has the value false, but

The following code creates two tensors k and l and writes them into the HDF5 file tensors.h5 in the current directory.

The resulting file can be viewed using any HDF5 viewer, for example using the free, cross-platform HDFView application as shown below. 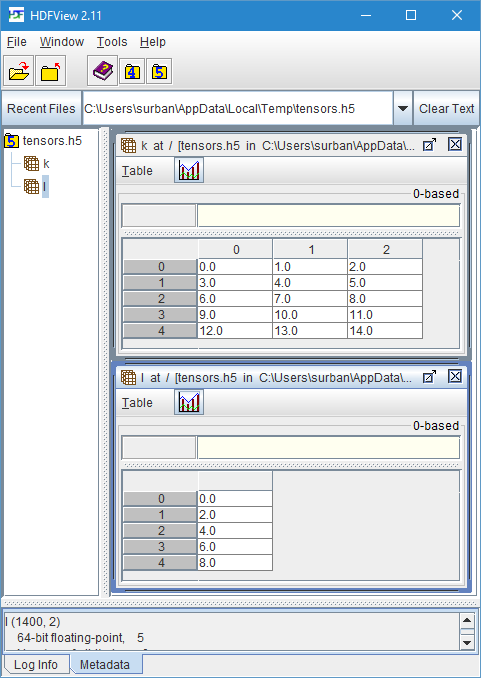 The following code loads the tensors k and l from the previously created HDF5 file tensors.h5 and stores them in the variables k2 and l2.

The data types of k2 and l2 must be declared explicitly, since they must be known at compile-time. If the declared data type does not match the data type encountered in the HDF5, an error will be raised.

Use the NPYFile.load function to read an .npy file and return its contents as an ArrayNDHostT. Use the NPZFile.Open function to open an .npz file and the Get method of the resulting object to obtain individual entries as ArrayNDHostT.

If your workstation is equipped with a CUDA capable GPU, you can transfer tensors to GPU memory and perform operations on the GPU. GPU tensors are instances of the generic type ArrayNDCudaT<'T> where 'T is the contained data type.

Note: While tensors can be created on or transferred to the GPU, currently there is no supported for accelerated operations on the GPU when using tensor directly. Thus executing tensor operations (except slicing and view operations) on the GPU will be very slow at the moment and should be avoided. This is supposed to change with future versions and does not affect compiled functions created by the Deep.Net library.

mGpu is now a copy of m in GPU memory.

It is possible to create tensors directly in GPU memory. The function ArrayNDCuda.zeros, ArrayNDCuda.ones, ArrayNDCuda.identity and ArrayNDCuda.scalar behave like their ArrayNDHost counterparts, except that the result is stored on the GPU.

Here we created a \(4 \times 4\) identity matrix of data type float on the GPU.

All functions and operators described in previous section can be equally applied to GPU tensors. For example, the code

takes three elements from the GPU tensor and multiplies them by 3 on the GPU.

We presented an introduction to working with host and GPU tensors in Deep.Net. Direct tensor manipulation will be used mostly for dataset and results handling. The machine learning model will instead be defined as a symbolic computation graph, that supports automatic differentiation and compilation to optimized CUDA code.